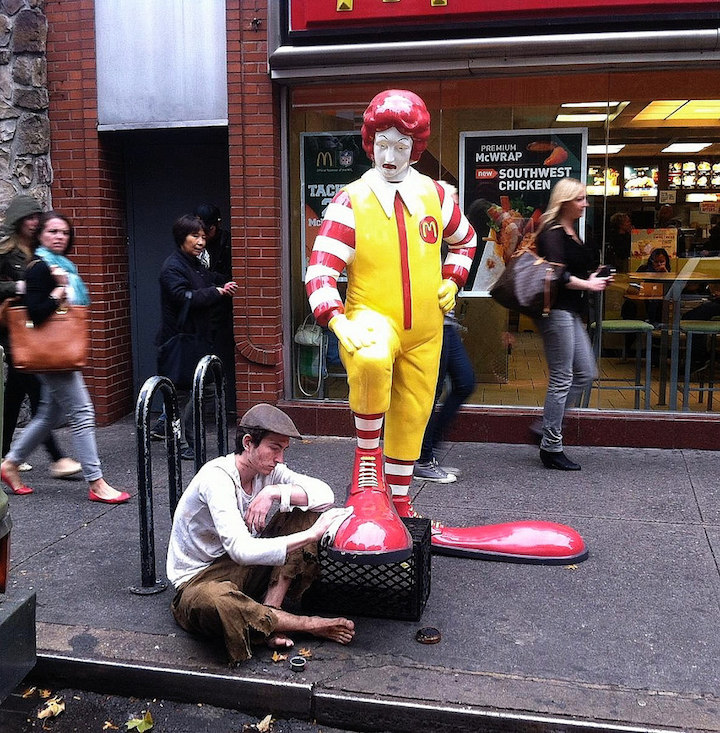 Mindfulness has been fairly effectively misrepresented in Western culture. We tend to see it as a type of ‘all-purpose performance enhancer’, something that can improve our everyday functioning, something that can reduce stress and anxiety and make us happier as a result. Naturally, this sounds very good to us – it’s what we are always looking for!

Mindfulness isn’t really that though – it goes a lot deeper than that. Mindfulness isn’t a tool or instrument that can serve the status quo. Mindfulness (or meditation) is really a way of freeing us from the tyranny of the over-valued thinking mind (which is what lies behind every status quo) – it is ‘a way of liberation’, as Alan Watt says. The question arises therefore, do we really want liberation? Is that what we are really looking for? Or were we just looking for something to smooth out the rough edges of our life, the bits that don’t seem to be working quite so well?

This isn’t a minor point. It goes a lot deeper than we might initially think – the thing is that, in everyday life (whether we realize it or not), we feel ourselves to be the thinking mind. It’s not something we want to be free from therefore! That’s not what we’re looking for at all. Too much control and too much thinking causes suffering though – it degrades the quality of our life to the point where it becomes unbearable. It is the fact that the thinking mind has such a deadening grip upon us that makes us interested in ameliorating its influence by practising meditation, but that doesn’t mean that we want to get rid of it entirely! We want to ‘have our cake and eat it’, in other words – we want to ease the squeeze that the overvalued rational mind is putting on us, but we still want to let it run our lives for us.

There’s nothing wrong with this, of course. It is perfectly natural that we should want to find relief from the excessive busyness and perennial restlessness of the thinking mind (not to mention its constant pernicious judgementalism), and yet at the same time not want to be ‘thrown in the deep end’, so to speak, with regard to our fundamental fear of being separated from our mind-created sense of identity, which is what ‘being freed from the thinking mind’ always comes down to. So maybe we’re not looking for the ultimate spiritual adventure, maybe we’re just looking for a bit of ‘stress reduction’!

The question – although we are likely to see it as such – comes down to precisely this. The question is, “Do we wish to live our life on the basis of this construct that we call ‘the self’, and make that limited version of life as comfortable and stress-free as we possibly can, or do we wish to be wholly liberated from this mind-created identity, and all of the interminable petty issues it brings with it?” Again, we have to stress that this is not a ‘moral’ choice; it’s not a question of ‘what is the right thing to do?’ When we concern ourselves with the right versus the wrong thing to do, this invariably means ‘the right thing in relation to the mind–created identity’ and so we are seeing things in an inherently biased way right from the start. If we were asking ourselves this question in a more ‘essential’ fashion (if that happened to be possible for as at the time) so as to find out what we want to do in our ‘heart of hearts’ (so to speak) then that will be a different matter. We would probably come up with a different answer in this case.

The point is of course that we can’t ask ourselves the question as to which of these two options we would like to put our money on (i.e. whether we would like to make the best life we can for ourselves on the basis of the mind-created identity, or whether we would like to be liberated from this very hard–to–shift illusion) because we simply don’t have the awareness (or perspective) to either formulate such a question, or – indeed – see the sense in asking it. Everything depends on how much perspective we have; if we don’t have the perspective to see through the mind-created identity then obviously our ‘choice’ will be to try and improve the living conditions associated with it. This isn’t the’ wrong’ choice – it’s just the choice that makes the most sense to us! Given our limited perspective, it’s actually the only choice that makes sense to us.

When we talk about mindfulness (or medication) being ‘misleadingly represented to us’ therefore, this is not to say that we shouldn’t use it in narrow instrumental terms so as to try to solve psychological problems, reduce anxiety and stress, etc, but simply that by portraying the practice of mindfulness solely in this way we are effectively closing the door on its true significance. We are subverting it (inevitably so, given the nature of our culture) in the cause of enhancing our ability to do what we are already doing. We’re not wanting to do anything differently, we just want to do what we’re already doing in a more effective way!

What bigger difference could there be doing what you already doing more effectively, and being freed up from the perceived necessity to keep on doing it? Having asked this question we are bound to observe that this is rather a big difference in emphasis – it’s actually a 180° turnaround. This doesn’t mean that if we do enough meditation we will end up stopping doing whatever we doing and start doing ‘something else’ instead – that would result in pure chaos, obviously. That would be ridiculous. But it does mean is that we will stop doing what we’re doing for the reason that we were doing it! Our orientation will change. This is what gaining awareness/perspective is all about – changing the reason we are doing what we’re doing.

This ‘revolution’ is very easy to explain – beforehand we were doing whatever we were doing for the sake of something that doesn’t really exist (we were in other words doing everything for the sake of an illusion). The ‘illusion’ is the narrow view of who we thought we were, which is the illusion that society itself supports and fosters. The illusion in question is ‘the separate sense of being a defined or demarked self’. When we think that we are acting on behalf of ‘a defined entity’ – be it the mind-created identity, a group, a nation, or the organisation we are working for – we are dedicating our efforts to the cause of ‘furthering a fiction’ and no good is ever going to come from this. It won’t even benefit the fiction in question; nothing can benefit a fiction – all the treasures of the world couldn’t do this! We’re barking up the wrong tree when we try to do this…

All entities, all ‘things’, all defined principalities disappear when consciousness comes back onto the scene! We see beyond the limits, the boundaries, the demarcations that we ourselves are projecting onto the world, and making so very important. When awareness comes back on the scene we stop serving these limits, these boundaries, these demarcations and – instead – we serve what was previously being limited, bounded, and demarked. Instead of serving one or other of ‘the ten-thousand things’, we now serve the Dao, we now serve ‘the Way’ – which is ‘the way that belongs to no one’…