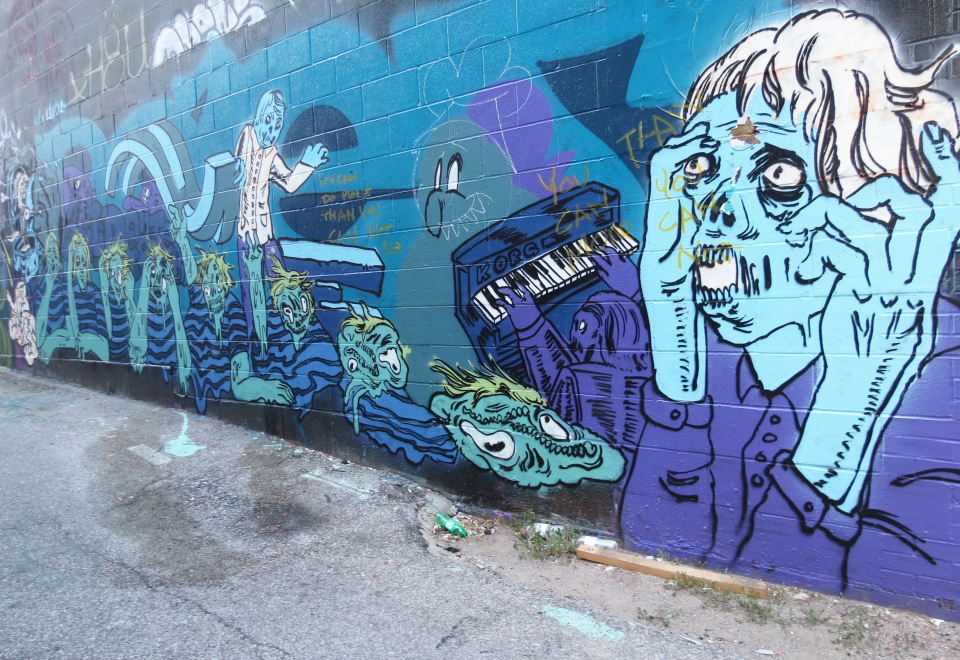 One way to explain understand anxiety is to say that it’s an indication that we aren’t engaging with life (or ‘facing’ life) as ‘who we really are’ but rather as some sort of ‘idea’ (or concept) of who we are, which is clearly not the same thing at all! If we were consciously connected with our true selves then we wouldn’t be experiencing this anxiety, in other words. Or – conversely – who we truly are in our ‘Wholeness’ doesn’t experience anxiety.

This is not a way of looking at things that makes much sense within our highly rational culture. The suggestion that anxiety in particular (or neurosis in general) is the result of ‘us thinking that we are somebody who we are not’ isn’t something that we can easily relate to, generally speaking. We are very naïve that way! We can easily see this to be true, however. One simple way to approach this matter is to say that we are never actually in the present moment. This would of course be a very familiar idea to anyone who’s ever practice meditation. ‘Being in the present moment’ sounds easy enough, but even a beginner in meditation very quickly learns that we aren’t in the present moment anywhere near as often as we might believe. Usually, we’re shifted slightly out of the present moment and into the abstract framework of thought, and when we’ve been ‘shifted into the abstract framework of thought’ in this way then we are no longer connected to the actual Wholeness of ourselves. Two things can’t go together – ‘being connected with the Wholeness of ourselves’ and ‘living wholly within the context of the rational mind’!

This suggestion (the suggestion that anxiety is a ‘warning light’ showing us when we have the come adrift from our core, our true nature) doesn’t ring true straightaway. It doesn’t seem to fit. There are after all lots of folks around who are living exclusively in the rational modality – most of us are – and yet who are not anxious. They seem to be ‘getting away with it’! It’s quite possible – more than possible, in fact – to be ‘rationally dissociated’ yet at the same time be completely confident in ourselves (even though the confidence in question may not be worth a hell of a lot). How then does the rather simplistic-sounding theory that we have just put forward stand-up to examination?

What we are really looking at here – although we’re using unfamiliar language – is the life of the everyday ego or ‘self-concept’. When we operate exclusively within the rational mode (i.e. when we are ‘rationally dissociated’) then we are identified with a concept of ourselves. That’s how the everyday ego comes into existence – by virtue of the fact that there is a ‘disconnect’ going on. No disconnect (with ‘who we really are’) means no rational ego. Why this should be so is straightforward enough – I am simply not going to be able to identify with the rationally-defined ego (which is the ‘mind-created self’) if I am the same time connected with the true essence of who I am. The rational ego can only survive ‘in the shadows’, so to speak; it can only operate under conditions of ignorance, where there is not much too much ‘truth’ floating around. I can’t go around believing that I am this ‘self-concept’ and at the same time remember ‘who I really am’.

So to come back to the life of the everyday rationally ego (or ‘dissociated self’), in its natural habitat, we can say that there are two phases of existence that it can exist in. There’s nothing new in this observation; all we are really saying here is that the rational ego can either be in ‘good form’, or it can be in ‘bad form’. We all know this well enough – obviously! This isn’t a trivial thing to observe either, even though it sounds like it – the ‘bipolar nature’ of the self-construct actually relates to the nature of logic (or rationality) itself, which can only ever manifest either as YES or NO.

Logic itself is bipolar, as is abundantly obvious just as soon as we start looking into it. Logic is all about ‘boundaries’ and boundaries always have two sides. The choice between the one possibility and the other (the choice between one side of the boundary and the other) is actually the only form of freedom that is available to a logical system – either a thing IS a particular way, or it ISN’T, either the answer to the question is YES or it is NO. This is of course generally the only kind of freedom that we understand; the suggestion that real freedom hasn’t actually got anything to do with either YES or NO doesn’t make any sense to us when we are operating in rational mode! The suggestion that there is anything beyond YES and NO doesn’t make any sense at all to the thinking mind, and it never can.

Suppose that I am concerned with some issue or other; what’s going on here is that I am trapped between two poles – the pole of ‘successfully solving the problem’ and the pole of ‘failing to solve it’. The only type of freedom I care about here therefore is the freedom to have things work out for me the way I want them to. What I can’t see is that this is not real freedom at all – it’s actually ‘the freedom to keep on getting trapped in the issue’! That’s actually the antithesis of freedom. True freedom would be the freedom not to care about either pole, which is ‘the freedom that exists beyond RIGHT and WRONG, beyond YES and NO’.

The point that we are making here is therefore that when we are wholly subsumed within the realm of rationality the freedom to have YES rather than NO (or RIGHT rather than WRONG) is the only type of freedom we can ever understand (for all that it isn’t really freedom at all but actually the ‘disguised antithesis’ of it). Having got this far in our argument, it’s not any leap at all to come to the point of being able to clearly see that – in this rational domain – the only two options of possibilities for this self-concept are for it to either ‘feel good because things are working out for it’, or ‘bad because they are not. ‘Freedom’ for the self-concept means one thing and one thing only and this is ‘the freedom to succeed at whatever arbitrary task it is that the rational mind is setting us to solve’.

The world inhabited by the self-concept is a very crude one, therefore – there’s not a lot to it at all! Either we ‘succeed’ in relation to some goal or other (or believe rightly or wrongly that we are able to) and we experience euphoria as a result, or we ‘fail’ (or believe that we are probably going to fail) and experience dysphoria as a result. Here is the ‘emotional life’ of the rational ego in a nutshell, therefore – its perceived state of well-being is always determined by how the rational mind tells it it is doing in relation to the ‘all-important task’ that it has been set. We have no independent life whatsoever when we are identified with thought and its activities. Our whole life exists on the continuum of thought – strung out between the two poles of YES and NO, as we keep saying. Nothing else matters to us!

The self-concept can be euphoric or it can be dysphoric, but the one thing it can never be is ‘at peace’, which equals ‘neither being elated nor despairing’. We often hear it said – when discussion turns to the subject of ‘living without attachments’ – that this sort of life this sounds very drab, very lacklustre. How could anyone put up with the tedium of living without elation on the one hand and despair on the other!? What a dismal prospect that is! It is of course the prospect of living always stretched out between hollow elation at one end and an equally hollow despair at the other that is dismal – perversely, we have turned our back on real life and instead are making do with the empty dramas of the thinking mind. Either I feel good because I believe that I am able to succeed at whatever task thought has set me, or I feel bad because it seems to me that I can’t, and this ‘up-and-down,’ win-or-lose. goal-orientated life is the only life I want.

Everything is a task when we are living within the domain of thought. Even recreation is a task. ‘Passing the time’ as a task – passing the time is actually a major task, as Eric Berne points out. The biggest task of all that thought gives us is the task of ‘maintaining the self-concept’. This is a full-time job if ever there was one! It’s not just a matter of maintaining our physical organism and sorting out the issues that are attendant upon this; maintaining the self-construct means:

[1] Maintaining the illusion that the SC actually exists when it doesn’t, and

[2] Maintaining the illusion that the SC is who we actually are!

Anxiety is not what we think it is, therefore. It’s not just a matter of ‘adrenaline surges’ or ‘increased cortisol levels’ or ‘flight-or-fight responses’ or ‘Type-1 or Type-2 personalities’ or ‘catastrophizing’ or ‘maladaptive thinking patterns’ or any of that sort of stuff. It’s not as simple as that, not as ‘obvious’ as that. There’s no way that we can get to the bottom of anxiety unless we first gain insight in the ‘secret task’ that we have been charged with, which is the task of having to maintain an idea of concept of ourselves that we wrongly imagine to be who we really are…