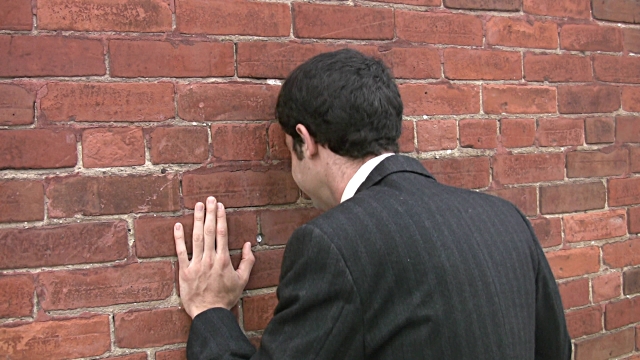 How can self-observation help us, or free us, when we’re trapped in painful states of mind? This is definitely counterintuitive – when feeling bad in ourselves then the priority always seems to be correct what’s going on, to fix whatever it is that’s making us feel so bad. This is what the logical mind will always tell us. It’s pretty much what everyone else will always tell us as well!

The first thing we can say about this is that – as logically compelling as this argument might be (and it is very compelling indeed) – it just doesn’t work. The second thing that we can say here is that not only does it not work, trying to fix ourselves in the way that we have just describe actually makes things worse. Straightaway therefore, we can see that we have two very good reasons not to head off down this particular road! Trying to fix (or improve) painful states of mind is NOT the helpful thing to do…

It’s not quite as simple as this in practice, of course. The urge to fix is so strong that we never have a chance to get any perspective on it. The impulse to correct whatever what is going wrong drives us and drives us – the thinking mind tells us that this is the only chance we have of getting free from the pain. The thinking mind is like a megaphone in our year in this regard and it just keeps roaring on and on at us. We just can’t see any other option in other words. And even if we can’t fix our situation (which as we just said we can’t, at least not in the long run) then we analyse the problem instead of fixing. Actually there is no difference between ‘trying to fix’ and ‘analysing’ – they are of course both the same thing.

Understanding that we can’t deliberately free ourselves from painful states of mind isn’t a ‘logical’ kind of a thing, anyway. This is not an understanding that comes out of the logical/thinking mind. There is actually no point in trying to tell someone that this doesn’t work until they have learned this for themselves and how we learn it is through the lesson of actual experience, not through a classroom situation or attending a seminar or from reading a book or someone else telling us. We can only learn this lesson the slow way, which is on a level deeper than that of the thinking mind. We have to learn it in our bones, so to speak…

So when we have got an intuitive, gut-level understanding that ‘fixing’ (or ‘trying to fix’) ourselves just isn’t going to work (any more than ‘analysing our situation’ is going to work) then this is no longer going to be our ‘number one priority’. The intense compulsion to ‘try to fix’ is no longer going to be totally overwhelming us and blinding us to any other possibilities. We have at this stage become a little bit more ‘psychologically aware’; we are not banging our heads on a brick wall in the way that we used to be and so we can say that things have got better in this way.

Even so – even though we have seen through the compulsive fixing (or analysing) reaction to mental pain – it still isn’t necessarily going to be clear how ‘self observation’ could help us when everything else has failed. The question remains – ‘how can self-observation free us from the mental pain and suffering that we are in?’ As always, the first thought that occurs to us is that merely observing what is going on (i.e. observing our own pain) will simply exacerbate our suffering because we now giving it our full undivided attention. Our automatic assumption is therefore that we would be better off distracting ourselves in some way and not focussing on the pain.

When we are talking about our actual mental health however, then ‘automatic assumptions’ (which is simply another way of talking about ‘automatic reflexes’) invariably prove themselves to be entirely wrong, entirely counter-productive. Mental health (or ‘inner freedom’, if we want to call it that) isn’t something that can be achieved by ‘acting on our involuntary reflexes’ (which always come down to involuntarily trying to fix the problem). We have to learn not to buy into these compulsive mechanical impulses if we are to free ourselves from the suffering-producing habits of the thinking mind.

Why being gently aware of our situation the situation that we are in frees us rather than trapping us more is because it is our attempts to either ‘fix’ or ‘flee’ the pain that traps us in it. As Carl Jung has said, ‘what we resist persists’. Acting on fear always solidifies the apparent reality of the situation that we are afraid of, just as acting on desire always solidifies (and makes more important) the object of our desire. Our attention gets narrowed down and narrowed down until we can’t see beyond the thing that we are reacting against (either positively or negatively). Acting on attachment (i.e. acting with regard to what we either like or dislike) inevitably reduces our perspective on the matter and the more our perspective on the matter gets reduced the more trapped we get, obviously enough!

There is a very deep principle here we never, ever see and this ‘principle’ has to do with what happens when we lose perspective on the way that we have just described. When we lose perspective two things happen (two things that are actually complimentary sides of the very same thing) – [1] is that the yet of false or illusionary picture of the world around us, and [2] is that we get a false or illusory picture of ourselves. This puts us in a very peculiar kind of predicament – that peculiar predicament of having to escape from something that isn’t real on the basis of ‘who we aren’t’.

Straightaway we can see that there is no ‘winning’ in this situation – we understand ‘winning’ to mean that the false or illusory picture of ourselves that we have of ourselves gets to successfully escape from the situation that we think this illusionary image of ourselves is in. Apart from the fact that this can never work since the illusory picture of who we are who we think we are is at root the very same thing as the illusory picture of what ever situation it is that we want to get away from (since these are two sides of the very same illusion, as we have just said) it wouldn’t help us any even if our ‘fantasy escaping’ were to be successful since the one who hopes and yearns to escape isn’t who we really are anyway!

Self-observation (rather than goal-orientated action) is what frees us from the trap we are in – it’s the only thing that can free us! Self-observation – with no goals, with no hidden agenda – gives us back the perspective that we have lost and it is this perspective, this ability to ‘see what’s really going on’, that frees us. Perspective frees us because it enables us to differentiate between the false and the true, the real and the unreal. The root of the trap that we’re talking about here is, as we’ve said, that we lose sight of the Big Picture and get caught up in ‘sticky’ delusions instead, delusions that we can’t unstick ourselves from. In fact the more we try to unstick ourselves the more stuck we get.

Awareness (or self-observation) has nothing to do with ‘resolving the dramas that we are perennially caught up in’. Awareness is just about noticing what’s going on – we see the game rather than playing it. Playing the game just traps in it, and there’s no benefit to be had from this. The game equals pain, the drama equals pain – there is the constant tantalising (but false) possibility of winning the game, resolving the drama, but that’s never going to happen. That’s just a lure which has the function of leading us deeper into the trap. The drama or game is really just a brick wall for us to go on banging our heads against but we can’t see that! As long as we have no perspective on the matter we’ll be banging our heads against this old brick wall forever! We’re wanting something we can never have (we’re thinking that there’s something good to be had there but there’s only pain) and what else is ‘neurotic’ suffering other than this?

Awareness (or self-observation) teaches us to see a subtler aspect of the world – a subtle aspect that straightaway becomes known to us just as soon as perspective comes back into the picture. Perspective changes everything! When we observe carefully enough we discover something totally unexpected – we discover that we aren’t who we thought we were. There is this kind of gross identity that we have, the kind of clunky, ‘block-like’ identity that is created for us by the thinking mind. And as G. I. Gurdjieff says, this identity (or ‘personality construct’) is really nothing more than a machine – it’s a machine because all it can ever do is obey the mechanical rules that have been laid down for it to follow. There is no freedom at all to be found here therefore – what freedom can there be in following rules? We’re promised ‘something good’ if we obey all the rules correctly of course (just as true believers are promised an eternity in Paradise) but this is of course just a ruse. It’s just ‘a ruse’ because it would never work – the so-called ‘paradise’ that we are promised is just a mental construct, just as the gross, mind-created identity (or persona) which is supposed to enjoy it.

The subtler aspect of the world which we notice when we start paying attention is actually the same phenomenon as ‘the subtle aspect of who we are’ – it is the subtle aspect of reality that does not fit into the thinking mind’s boxes and which does not need to obey any of the rules of the game that thought has set up for us to play. Once we realise that we are not this ‘gross identity’ but are actually something much, much deeper than this then that awareness changes everything by 180°, so to speak. It’s not just some kind of ‘minor readjustment’ that goes on here, in other words! Immediately – just to give one example – we recover our sense of humour and stop being so terribly driven about things. We also recover our gentleness and kind-heartedness and our ability to feel compassion for everyone around us. We no longer feel that we have to fight against the universe and other people.

What we talking about here isn’t some ‘exalted’ state of being, either. Some Buddhist texts refer to this subtle nature simply as ‘ordinary mind’. It’s just ‘who we are’; it’s our inherent nature. It’s our inherent nature but we never – in the ordinary run of things – realise this. We never notice our true nature, even though it has all of these wonderful attributes or qualities that our conditioned (or mechanical) nature doesn’t. It’s not just as if ‘we’re not really interested enough to notice our true nature; it actually IS that we not interested enough! We’re too ‘busy’ for that. We not in the least bit interested in being aware of our true nature because we always too preoccupied with ‘the game’, because we’re always too caught up in the ‘mind-produced drama’.