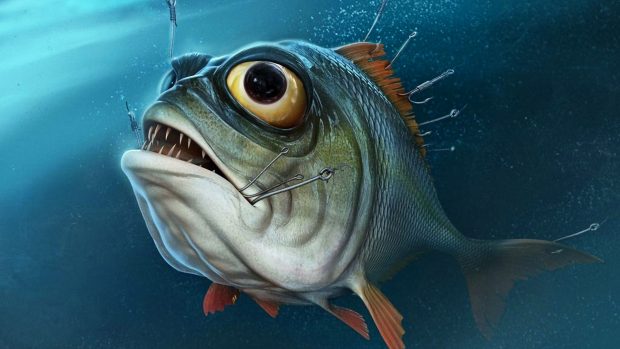 We are as completely absorbed as we are in the ongoing fiction of our thoughts because we are hooked on a promise, because we are waiting for the next much-anticipated treat to come away. This business is wholly absorbing, infinitely absorbing – we really don’t have any interest in anything else, anything that isn’t related to the treat that is supposedly coming our way. We are ‘strung out’ – either in a good way or a bad way – waiting to find out whether the promise is going to be delivered or not. If we are optimistic in this regard then we’re going to find ourselves in the Gardens of Euphoria and if it’s pessimistic we are then we’re going to be lolling around in the Dark Kingdom of Dysphoria instead. It’s one or the other.

The curious thing about this that it doesn’t matter how mediocre or insipid the treat that we’re waiting proves to be; even if it’s the most dismal offering ever we are still going to be absorbed by the prospect of receiving it, hypnotized by the prospect of receiving it. The point is that we have to be waiting for something because that’s the only mode of being we know – no matter how tawdry the offering might be it still serves an important function, therefore. No matter how insipid or paltry the treat is it still facilitates the Waiting Game.

This isn’t a particularly hard idea to understand of course – we need only think of television and the way in which when we are habituated to watching television we will end up watching any old rubbish, or the way in which when we get habituated to browsing the internet we will end up clicking on all sorts of ridiculously trivial bits of nonsense. This is a very familiar pattern – once the system gets a hold on us that it doesn’t matter what sort of banality is it serves up for us for dinner – will still be there no matter how much our intelligence is being insulted. We’ll still be there because we’ve got nowhere else to go.

So it is with our thoughts – we are enslaved to our thoughts because we don’t know what else to be doing other than thinking! We’ve been conditioned by thought and thought is all we know – thought doesn’t have to provide us with anything interesting or valuable because it’s already got the monopoly on us. Thought is providing something that is important to us however, it’s just that we can’t see or understand what this is. On the face of it – on the explicit level of the mechanism – thought of providing us with ‘click-bait’, it is providing us with ‘ongoing distraction from where we actually are’. Beneath the level of the explicit however there is a more insidious mechanism at work and that has to do with the way in which our sense of actual identity is being maintained.

This isn’t a straightforward thing to understand because the true nature of our ‘identity’ is opaque to us just as long as we believe ourselves to be that identity. When we no longer perceive ourselves to be that concrete identity then the thick fog clears and we can see what’s going on much more clearly. The actual mechanism is very simple however, even though it’s impossible to grasp from the POV of our ordinary thinking – when we waiting for the next treat to come along came very about then this state of expectation (or hope) implies the existence of ‘the hoper’, it implies the existence of ‘the one who expects’. The euphoria we experience seems to be about the glorious fulfilment of this hope but it isn’t at all – that’s merely the cover story, that’s merely a smokescreen. The euphoria really comes about because we have created the believable illusion of the concrete identity!

It doesn’t in the least bit matter whether the concrete sense of self is constructed in the euphoric or non-euphoric way – whether the CSOS is having a good time or not is quite relevant! The crucial point is that there should be a ‘timeline’, an unbroken continuity of one sort or another. Where there is no continuum there cannot be any trace of the self, not even a whisper or a hint of it. This is because the CSOS absolutely cannot exist in the present moment. If there ever was ‘an absolute impossibility’ this is it! This can be readily verified through personal experience: in the present moment there is no continuity of thought, there is no past and no future. Contrariwise, when there is a continuity, where there is a past and future all joined up together in an unbroken timeline, then there can’t be a present moment. The present moment stands alone – it has no history and no existence in this projected scenario that we call ‘the future’. It is a discontinuity, which is to say it is ‘a break in the continuum of thought’, as well as being ‘a break in the continuum of the linear or serial self’.

When we are in the present moment we cannot say ‘I am this’ or ‘I am that’ because all definitions require us to bring ‘something else’ into the picture and in ‘the now’ there is nothing else. That’s the whole point. The present moment ‘stands alone’, as we have just said, it doesn’t exist in comparison or in relation to anything else. It’s not part of the system of thought. The concrete self on the other hand can only exist in comparison to ‘something else’ and this is why we can say that there can’t be ‘a sense of identity’ in the now, in actual reality. The difference between the continuum of thought and the discontinuity of the present moment is inconceivable therefore – there’s no way to ‘compare the one with the other’. The COT is a series of regular events that continue forever with nothing truly new ever happening; the discontinuity of the now – on the other hand – is incomprehensibly unique. We have absolutely no way of saying anything about it at all.

When thought isn’t providing us with something to look forward to (either in a euphoric or non-euphoric way) or something to look back at (again, either euphorically or non-euphorically) then we have no way of constructing the concrete sense of self. We haven’t got the wherewithal to do that. The continuity of thought is under threat therefore; the timeline of the identity is at risk of disintegrating entirely. As we have said, we need to be thinking something no the matter how banal and repetitive these thoughts might be. Even if our thoughts are calling us great suffering and anguish, we still need to be thinking them. We still need these thoughts in order to provide the framework with which to construct the believable perception of the concrete sense of self. We’re addicted to thought and we can’t do without it, in other words! And yet the truly weird thing about this is that the concrete sense of identity which thought is providing us with has nothing to with us at all. It’s only a ‘mind-created fiction’…