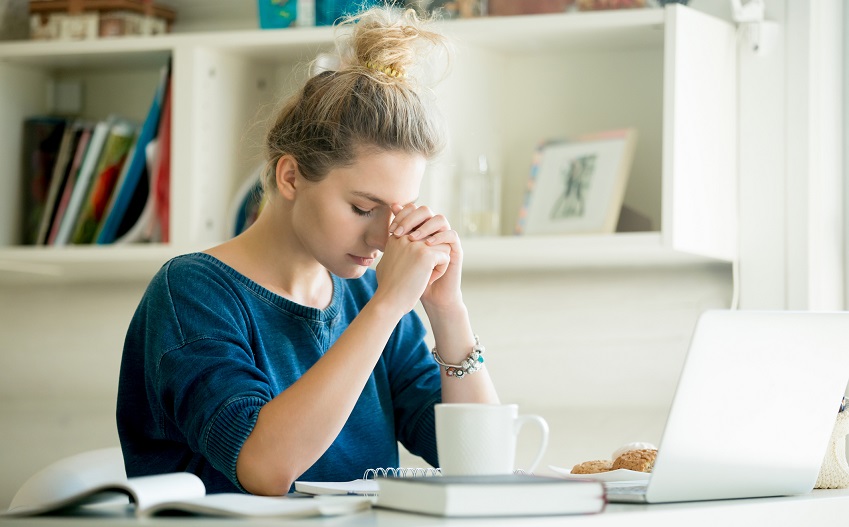 Mark Twain is sometimes quoted as saying ‘worrying is like paying a debt you don’t owe’. This just isn’t so however – if this were true then we would be able to stop worrying quite easily and we absolutely can’t. If this were true then that would mean that the anxiety or worry ‘shouldn’t be happening’ and having this attitude that ‘anxiety shouldn’t be happening’ is exactly what lies behind the anxiety in the first place!

If I have the attitude that ‘the anxiety shouldn’t be happening’ then I am alienated from it and all I can do is keep on trying to push it away. We can’t simply ‘push it away’ however – as experience shows very clearly – and so this leaves us in a very disagreeable position – it leaves us in the position of being alienated from our anxiety, of being 100% against it. and yet at the same time utterly unable to get rid of it. And – to add the final touch to this mix – when we push against anxiety then this only feeds it. We are actually perpetuating the anxiety therefore – we are perpetuating it by being alienated from it and by the fact that we are fighting against it. We are perpetuating the very situation that we most want to get away from and this happens because we automatically take the position that ‘the anxiety shouldn’t be there’.

Trying – in any way – to argue against the anxiety and say that it ‘shouldn’t be there’ (or saying that it isn’t necessary to be suffering from anxiety if we take the correct steps) isn’t such a great idea therefore. We are not just pointing the finger at Mark Twain here of course – all ‘rational therapies’ – very obviously – take the position that the anxiety shouldn’t be there and that it wouldn’t be there if we take ‘the correct steps’. That’s the whole point of ‘fixing type’ therapies, after all! The whole point is that if we do what that therapeutic protocol tells us to do (which we think about things in the way it tells us to) then this will help us with the anxiety. All ‘fixing-type’ therapies put us in the position of being alienated from anxiety. How could they not?

This doesn’t however mean that we should try to ‘make friends’ with our anxiety so that we are no longer ‘taking against it’ and thereby feeding into it. The problem with this response (even though it seems to make sense, based on what we just said) is that it’s a ‘purposeful action’ and all purposeful actions are an attempting to fix something or run away from it. What else would our ‘purpose’ be, after all? Our ‘purpose’ (our ‘agenda’) is to get rid of the anxiety; if this is the approach we’re taking then we’re trying to get rid of anxiety by making friends with it. We’re manipulating as normal, therefore.

When one seeks to regulate something,
he is in fact going contrary to it.

Where he seeks to embellish something,
he is in fact harming it.

Nonaction does not mean being completely inert,
but rather that nothing is initiated from the ego-self.

The only type of action that ever comes from the ego-self is controlling or manipulating, which is an interesting thing to realise! The ego itself actually creates and maintains itself through controlling, which means that not only is controlling the only type of activity that the self is capable of, but also that it absolutely needs to keep on controlling if it is to continue existing (or rather, if it is to seem to itself to continue existing, which it doesn’t really since it is only a thought). To suggest to ‘this thought of who we are’ that ‘not controlling’ is a cure for anxiety is not very helpful therefore since the ego-self is more afraid of not controlling (and what this may mean) than it is of the anxiety! And in any event – as we have said – ‘the thought of who we are’ is simply not capable of ‘not controlling’, any more than it is capable of ‘not judging, or ‘not scheming’.

We can’t control our worrying or anxiety, therefore. We can’t manage it because managing is also controlling. When it comes down to it, anxiety can never be separated from the idea or thought that we have about who we are – the two always go together, even though the inherent anxiety of the self-concept may be hidden or latent for a long period of time. The reason the ego-self can never be truly free from anxiety (even though it can be in ‘successful denial’ of it for a time) is very easy simple to explain – if the ego-self can only maintain itself by control, and if it starts for some reason to doubt its ability to control, then not only does this threaten its ability to function effectively in the world (in terms of our confidence with regard to obtaining our goals) it also – much more significantly – threatens the ego-self’s very existence. Even though we can’t see the connection between the ability to control (or ‘the ability to put a slant on things’) and our continued ego-based existence, the connection is still intuited on some deep level of our being.

We might ask why the ego-self (or self-concept) should suddenly start to doubt its ability to control with such major consequences and one way to answer this question is by suggesting that there is a process here happening whereby, for whatever reason, we ‘glimpse the truth’, and having glimpsed it we can’t forget about it again! ‘Ignorance is bliss’, so it is said, and in the case of the self-concept this is most certainly the case. The self-concept needs ignorance just as the supernatural creatures known as vampires are said to need the protection afforded by the cloak of night. On one level we can say that ignorance for the ego-self means that it doesn’t see that it is always controlling; and on a deeper level we can say that ignorance for the ego-self doesn’t see that it always has to be controlling in order to maintain (or validate) itself, and awareness of both of these points is disagreeable to us. The second point is, of course, the most disagreeable of all!

This isn’t to say that we consciously ‘make the connection’ but rather what we’re saying is that we have ‘become aware of it without knowing that we have’ and that this secret knowledge (which we can’t allow ourselves to know that we know) changes everything. It puts a different complexion on things entirely. We are fighting a much grimmer battle now because not only are we ‘controlling in order to maintain the ego-self’, we are also struggling against the awareness that this is what we are doing, along with the awareness of what this means. The reason this struggle is a grim one is of course because we now know a deep, deep level that what we are trying to do is impossible; it’s impossible because if the ego-self isn’t real (clearly it can’t be if we are having to maintain it ourselves) then how can we ever make it real, no matter how hard and gamely we struggle? This is a bit of a no-brainer really. The ego-self which has had this dangerous semi-conscious insight into its own nature is necessarily ‘pessimistic’ in its outlook; we may observe that it is guilty of the sin of ‘negative thinking’ but why wouldn’t it be? Awareness, after all, has come into the picture. The blissful ignorance has been fatally punctured and we can’t go back to how things were before.

It sounds strange to be talking about the ego-self in this way, as if it weren’t real, when this is very much who we understand ourselves to. This idea seems deeply perverse; it seems to go against everything that makes sense to us. The particular strongly-defined ‘sense of self’ that we’re talking about here is however simply a function of our very focused way of looking at things, which is to say, it is a function the ‘way’ of the rational intellect. We’re looking down a microscope, so to speak, so that whilst what we see gets to be rendered in great detail, we have had to become blind to a very broad section of reality in order to have this type of vision. It also like having our awareness shone through a narrow slit in some kind of opaque partition, as in the famous optics experiment. In daily life – because of the ‘focusing’ effect of the rational intellect – we end up with the permanent ‘fixed sense of ourselves’ as it is produced by a very narrow beam of awareness, and because this construct or artifact is there all the time, is so ubiquitous, we almost inevitably make the mistake of thinking that it is who we are. If we weren’t so exclusively rational in our outlook this wouldn’t be the case, but we are.

When we do think that this artifact of our tightly-focused attention is who we are then of course we do owe a debt that needs to be paid; we owe a debt that needs to be paid even though we can’t for the life of us see what that debt is although though we still know (in some way) that it’s there. The debt in question has to do with what we have to do in order to keep the self-concept afloat; the fact that we have to keep ourselves unaware of what it is we’re doing and why. Anxiety (and its low-grade cousin worrying) isn’t something that is completely ‘unnecessary’ therefore, isn’t something that we should not be doing’. It isn’t ‘meaningless suffering’, in other words, but rather it’s there for a reason. It’s telling us something. If we are in the business of ‘identifying with the self that is produced by the tightly-focused beam of attention that is coming through the narrow slit of the thinking mind’ then we are always going to have this debt to pay – it is rightfully ours! The self can’t do anything about the situation, naturally – anything it did try to do would only exacerbate the situation, as we have said. The point is however that the ego-self doesn’t have to do anything! All that is necessary is for us to see that this ‘sense of self’ is an artifact of our totally-tightly focused beam of attention. How can we be anxious about it then?

Conditioned existence comes at a price, just as the Buddha said in his First Noble Truth, which is the truth that we rational Westerners don’t like. Conditioned existence is an inherently painful (and anxious) mode of being because it is both limited and ‘dependent upon conditions’. We can’t understand that we’re painfully restricted and dependent upon conditions because we don’t have any perception that there is any other possibility. Ironically therefore, in addition to the suffering created by our arbitrary restrictedness there is also the anxiety and worry that comes about because of our doubts regarding our ability to successfully maintain and protect this extraordinarily limited and painful mode of existence.