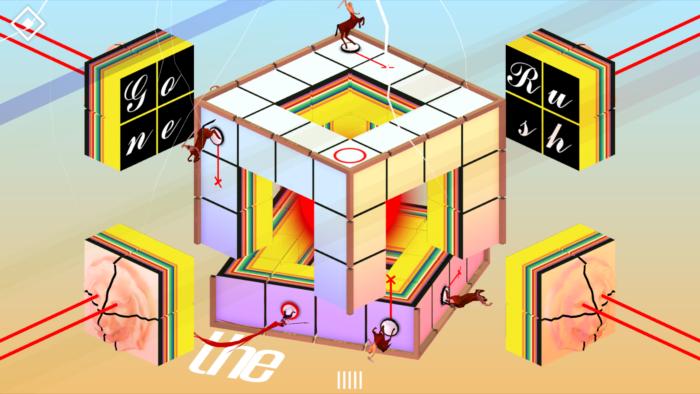 What does it feel like not to be relating to life as if it were some kind of a problem, some kind of a puzzle that needs to be worked out? This turns out to be a very difficult question to answer – it sounds straightforward enough but it isn’t. If we ask instead what the world looks like when we’re not trying to get something out of it then this is the same thing – just about nobody knows! Very few of us actually care…

The thing is that we’re almost always treating life as if it were some sort of problem to be solved. Even if we don’t realize that we’re doing so (which we often don’t) we’re always trying to manipulate life so as to get some sort of benefit out of it. The puzzle is how to get the benefit! When we’re trying to get something out of life – which in one way seems very normal to us – then we are being goal-orientated and when we’re being goal-orientated (or purposeful) then the problem that we’re trying to find the answer to is simply “How do I achieve my goal?”

Even if we’re chilled out for a while so that we’re not, for the moment, trying to obtain a particular goal or enact a particular purpose we’re still – in all probability – treating life as a problem to be solved. Just as long as the thinking mind is engaged, just as long as thought has ‘its hand on the tiller’, then we’re problem-solving. Thought can’t do anything else but problem-solve. The problem that we’re trying to solve even when we don’t know that we are trying to solve anything is the problem of ‘knowing what reality is’. Or as we could also say, the problem we’re trying to solve is the problem of ‘how to be in reality’ (which is the same thing as ‘how to relate to reality’).

We’re constantly trying to work out what our relationship with reality is, even though the chances are that we don’t realize that we’re doing this. one realize that we don’t see it happening is because the process is happening unconsciously, in the background, as some kind of ‘low-level anxiety’, and another reason why we don’t perceive ourselves to be stressing out over the existential question of ‘how to relate to the world’ is often because we already imagine that we have hit upon the right way of relating. The mega-collusion that we call ‘society’ is very good at providing us with this particular illusion (i.e. the illusion that we actually know what life is and how we’re supposed to live it). Society tells us who we are and what life is all about and so – at a stroke – all the existential issues that would otherwise be troubling us are put to bed! That’s the big favour the social collusion does for us.

That this is the case is not immediately apparent to us. If someone were to come up to us and ask us if we knew what life was all about, or ‘what reality is’, the chances are that – unless we happen to be some sort of fundamentalist Christian – we will say that we don’t. We don’t consciously claim to know ‘what reality is’ but on a subconscious level we nevertheless tend to assume this in some way. Our rather prosaic and ‘matter-of-fact’ descriptions of the world imply that we do; our concrete thinking about things implies that we do. Our complete ‘lack of wonder’ – which is an inevitable consequence of the operation of the thinking mind, which as Krishnamurti says always makes everything ‘old’ – implies that we do…

Just as long as our thinking (or our language) is of this prosaic, literal nature then we are assuming a knowledge about the world that we don’t actually have. This is what thinking does, as we have just said – it assumes a knowledge that isn’t there! Without ever stopping to reflect on what we’re doing we’re ‘wrapping everything up’ with our thoughts, with our literal descriptions of the world. We’re ‘packaging reality’ with our ready-made concepts so that we never have to look at it and then we’re proceeding to get on with things on the basis that we already know what’s under the packaging.

So our point is that we never – or almost never – know what life is like when we aren’t treating it as a problem. Either we see it as a problem that we need to solve but haven’t yet done so, or we treat it as a problem that we actually have solved. In the first case there is anxiety in the mix – either to a greater or lesser degree depending upon how many teeth the existential crisis is manifesting for us, or there is some sort of depression there because everything has already been worked out and there is no existential challenge left for us. The absence of any existential challenge to life might sound good but when we achieve this we have actually shot ourselves in the foot big time! We’ve been ‘too smart for our own good’ – when there’s no more ‘existential challenge’ there’s no more life!

When the problem hasn’t been solved yet there is always the anxiety that perhaps we mightn’t be able to solve it. There is the worry that we might not be up to the challenge. There is a type of motivation inherent in anxiety but it is a closed sort of motivation because all we want to do is to press for a conclusion and after this we simply don’t care. We never look beyond our goal, which seems to subsume everything in life within it. This equals ‘treating life as a finite game’ therefore – all we want to do is get rid of the irritation of not having won the game yet, not having solved the problem yet. We’re ‘end-gaming’. We’re very very serious, very very humourless about getting it all ‘done and dusted’. We really haven’t got time for anything else. We’re pushing for the conclusion…

It is the relationship between us and our invisible assumptions (the things we have taken for granted without knowing that we have taken anything for granted) that lies at the root of the ‘problem-solving modality’ therefore. This relationship has nothing to do with reality ‘as it is in itself’ but only with reality as we lazily ‘take it to be’. When it comes to ‘reality as it is in itself’ there is no problem – there is no need to ‘win a game’, no need to obtain an outcome that will somehow make everything alright (or avoid a negative outcome that will be totally disastrous). There is no need for any of that. There’s no ‘issue’ that needs to be sorted out satisfactorily – the issues (or problems) only exist in our thinking. The thinking mind creates problems that need fixing; it is in the mind’s nature to do this.

Actually, when we are perceiving life as ‘a problem that needs to be fixed’ (or as ‘a problem that already has been fixed’) we are not living life at all – we’re living our fantasy of life, not life itself. We’re doing a dance with our own assumptions – the assumptions that we cannot see to be only assumptions. We are living in a world that is made up of our own unrecognized projections and so we are never encountering reality at all. To encounter reality (or ‘life as it is in itself’) we’d had have to look beyond our assumptions about it and this is the one thing that we never do.

Why is it that we always have to be working on some problem or other, or be fondly imagining that we have solved it, imagining that we have already ‘got there’? Why do we have to be having some agenda that we’re always orientating everything towards so that we’re either feeling optimistic/ euphoric because we feel that things are going to ‘work out’ (or pessimistic /dysphoric because we suspect that they’re not) or complacent because we believe that they have already worked out, that we have already ‘arrived’? Why is this? Why can’t be ever just ‘let things be’? Why can’t we ever stop making assumptions?

The answer to these questions comes surprisingly easily once we get this far into the discussion – it’s not hard to spot what’s going on here, under the confusing ‘smokescreen’ of the mind’s illusions. The reason always have to be orientating everything around an all-important agenda is because that agenda is us. We construct ourselves around the agenda, around the need to fulfil it. The assumption that we can’t get beyond, can’t see beyond, can’t let go of is simply ourselves. The conclusion that we’re pressing for (without seeing what it is we’re pressing for) when we’re trying for all we’re worth to ‘solve the problem’ is the conclusion that our idea of ourselves is real, is true, is valid.

This is why we always have to be relating to life as if it were some sort of problem – because we’re always looking at life (or the world) from the point of view of the game-playing self. The problem the self is trying to solve is itself! Everything is always a problem for the self because the self is itself a problem, so to speak. Why is the self a problem? Because it always needs validation, and if it doesn’t get this validation then it can no longer believe in itself as a concrete entity, and actual ‘thing in itself’ rather than just an arbitrary viewpoint or ‘set of assumptions’, which is what it is.

We validate ourselves by fulfilling our arbitrary agenda just as we negatively validate ourselves by failing to do this. There’s the euphoric excitement of thinking that we’re going to achieve the all-important goal and there’s the dysphoric excitement of thinking that we’re not, that this isn’t going to happen, and both the agreeable and disagreeable excitement have the function of defining the game-playing or concrete self, the self that hopes and fears. The euphoria that we love and the dysphoria that we hate are what perpetuate the mind-created fiction of the one who likes and dislikes, the one who strives for the goal, the one who wants to win and fears losing.

And even if there’s no immediate goal or puzzle on the horizon (and we’re just having a bit of ‘down-time’ from problem-solving or goal-chasing or game-playing) there’s always the problem of describing reality, defining reality. The reason it is so important for us to definitively describe or define reality is because in describing or defining reality we describe/define ourselves. ‘How to describe ourselves’ is the problem that we always need to solve – that’s how we get to exist, that’s how we get to feel that we’re real. We are describing everything from the point of view of the self after all, and this automatically validates that self, that viewpoint. That’s the trick that we’re involved with – we’re ‘tautologically self-creating’. We get to feel real by ‘defining ourselves in relation to a version of reality that we ourselves have created’, in other words…

This brings us to the real question, which is this –

Are we at all interested in seeing reality ‘as it actually is in itself’ or do we only ever want to know what it looks like from the redundant (or ‘tautological’) point of view of the unreal self?